Race for the Rail: It’s the Super Bowl of Onewheel, the NASCAR Cup Series, the Big Kahuna. Anyone who wants the world to know they are the fastest Onewheel rider knows they have to win Race for the Rail to prove it.

Riders battled it out all season long in hopes of earning a coveted ticket to the invite-only race, hosted anually by Onewheel Racing League (ORL). The league sanctioned three community events and hosted two regional qualifiers of its own to determine the final race contestants.

The top 16 men and top 12 women were invited to duke it out at Sky Tavern ski resort in Reno, Nevada on August 20 and 21, 2022. Winners received a $10,000 cash prize and took home the namesake Rail trophy, which was fashioned into a sword for this year’s race.

It’s perhaps unsurprising to see Kyle Hanson–last year’s runner up, and number three seed this season–take home the trophy at Race for the Rail 2022. With catlike reflexes and a reputation for staying on his feet at all costs, the Wheel Fun Stuff founder is well deserving of his nickname “El Gato,” and his skill set was perfectly tailored to this year’s race course.

But Hanson’s path to victory was anything but smooth, both metaphorically and literally. High-speed carnage led to multiple upsets in the early heats of the men’s race. With many of “the usual suspects” out of the running, the rest of the bracket was anyone’s guess.

In the very first round, local rookie Thor Callaghan dethroned top seed and fan favorite Austen Silva with a ballsy pass in the final switchback section. Neil Bennett also moved on to the next round, while Jesse Turpin (Flyin Hawaiian) was eliminated.

In the second heat, OG riders Dave Stewart and Bodhi Harrison definitively shut down any rumors that may have been calling them “past their prime,” besting the two Noahs (Bild and Mead) to move on to the semifinals.

In the third heat, some may have hoped to see a repeat performance by upstart Brandon Peavy, who surprised fans by winning the Eastern Qualifier. However, it was second seed Jeff Adair and 2021 champ Tyler James who moved on from that round, while Peavy and Kyle Klausing were eliminated.

The fourth heat might have been dubbed “the Onewheel shuffle,” with riders wiping out and trading places from top to bottom. Along with Kyle Hanson, rookie Luke Austin kept his feet under him and crossed the finish line ahead of Branden LaCour and Sam Lara.

In the semifinals, Neil Bennett and Bodhi Harrison notched a clean victory against Thor Callaghan and Dave Stewart. Tyler James was eliminated in a shocking turn of events when he skidded out and crashed just inches from the finish line, to be passed by Luke Austin and Kyle Hanson in hot pursuit.

In the finals, Neil Bennett took an early spill coming into the single track while Luke Austin came off his board on the first kicker. Neither was able to make up lost ground against fast, clean runs by Bodhi Harrison and Kyle Hanson. Harrison put on a burst of speed and nearly closed the gap in the final section, but it was not enough to overtake Hanson, who kept his cool and his lead across the finish line.

This year’s women’s bracket presented a mix of fresh and veteran faces.

Mercedes Silva was a new name to many this season, although those in the know were not surprised to see her hit the ground rolling this spring after an injury kept her from racing in 2021. Silva has consistently dominated the women’s Onewheel racing category in 2022. She earned and defended her number-one rank all season long and was a fan favorite to take home the Race for the Rail trophy.

Defending champion Zoe Thomas kept it low-key this season, so it was difficult to predict how she would perform. You know she’s fast enough to win, but did she want it? Apparently not as much as Kristy Miller, who (along with Silva) bested Thomas and Lily Lam in the first heat.

Allie Stanley is known for her speed and style and for running the Wheel Femme Stuff Instagram account. She won the women’s division at this year’s Shredfest. Stanley separated her shoulder during practice the day before Race for the Rail but opted to compete anyway.

Gabi Soto has made herself a household name by consistently attending and ranking well at sanctioned events the past two seasons. She and Stanley won their heat against Kay Love and Nicole Watamaniuk and moved on to the semifinals.

Finally, Rachel Payne is known for founding and organizing the DirtSurferz race, a sanctioned ORL event. Payne was ranked third this season and, as predicted, advanced to the semifinals along with Racheal Cecil, defeating Janet Thorne and Emily Bell.

Finally, Racheal Cecil is one of the sport’s OG women, a founding member of IOWA, and a director and official coach for Drift Sisters, the women’s Onewheel collective. There’s no doubt she’s fast–but fast enough to beat Silva? That was the showdown everyone hoped to see, and these ladies delivered!

Rachel Payne and Allie Stanley joined them in the finals, but by the first kicker, it was Silva and Cecil in the spotlight. Both women kept it clean and fast, with Cecil closely tailing Silva through the chunky single track, over the kickers, up and down the “Ranger Danger” feature, and through the snaking switchback at the bottom.

Then, on the final curve, Cecil went for a daring pass on the inside and pulled ahead! Silva stepped on the gas to close the gap in the final few yards, but it was too much for the board and she nosedived just feet from the finish line, where Cecil took the win. 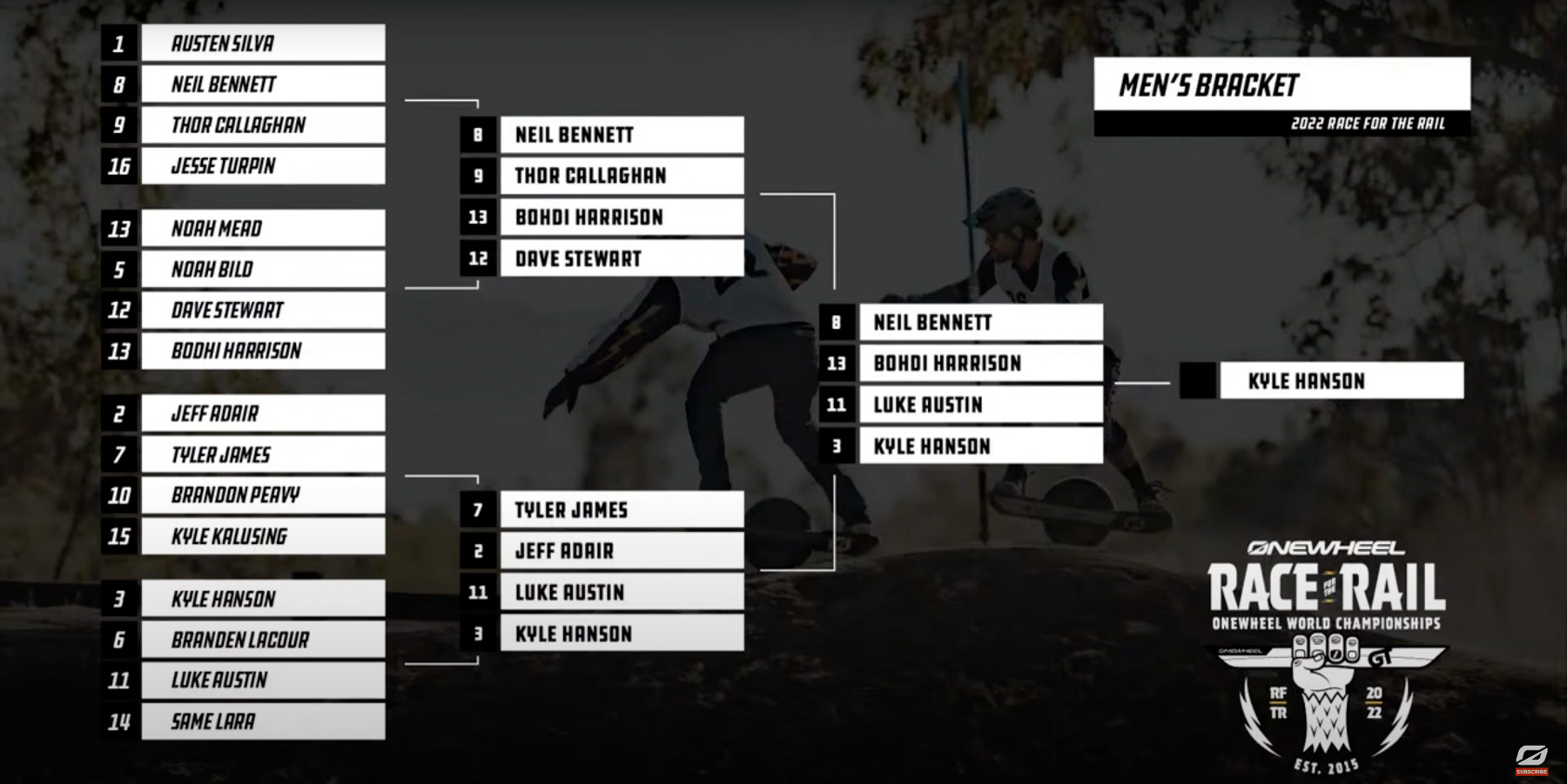 Due to illness, Noah Mead replaced Brenden Schurmeier as alternate. 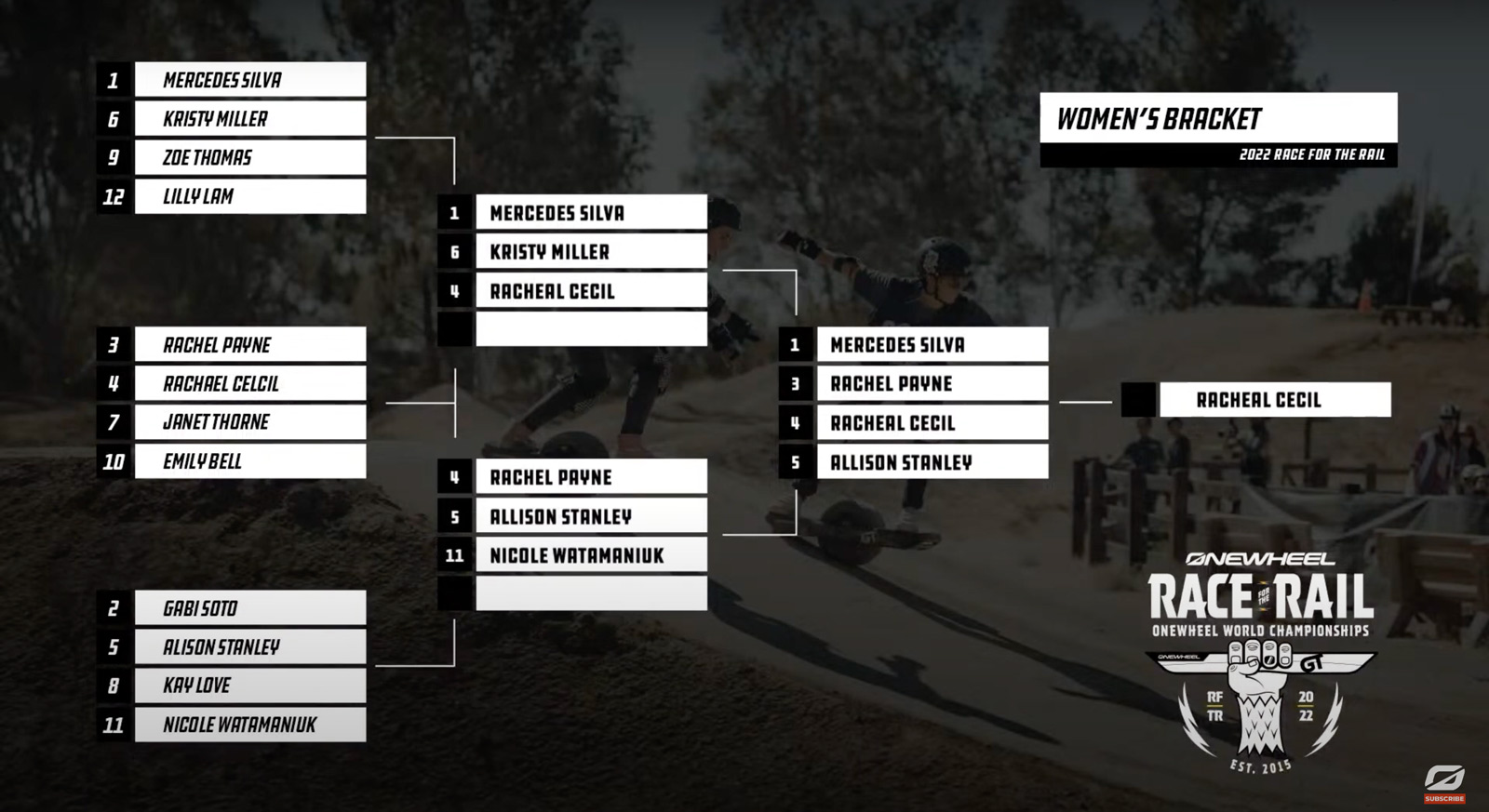 IOWA is transitioning to a subscription-based membership model. Become a member to keep enjoying great content like this, as well as access exclusive training content, vendor discounts, community-building resources, and more! Memberships start at just $5 per month.