A Tale of Two Onewheel Movies 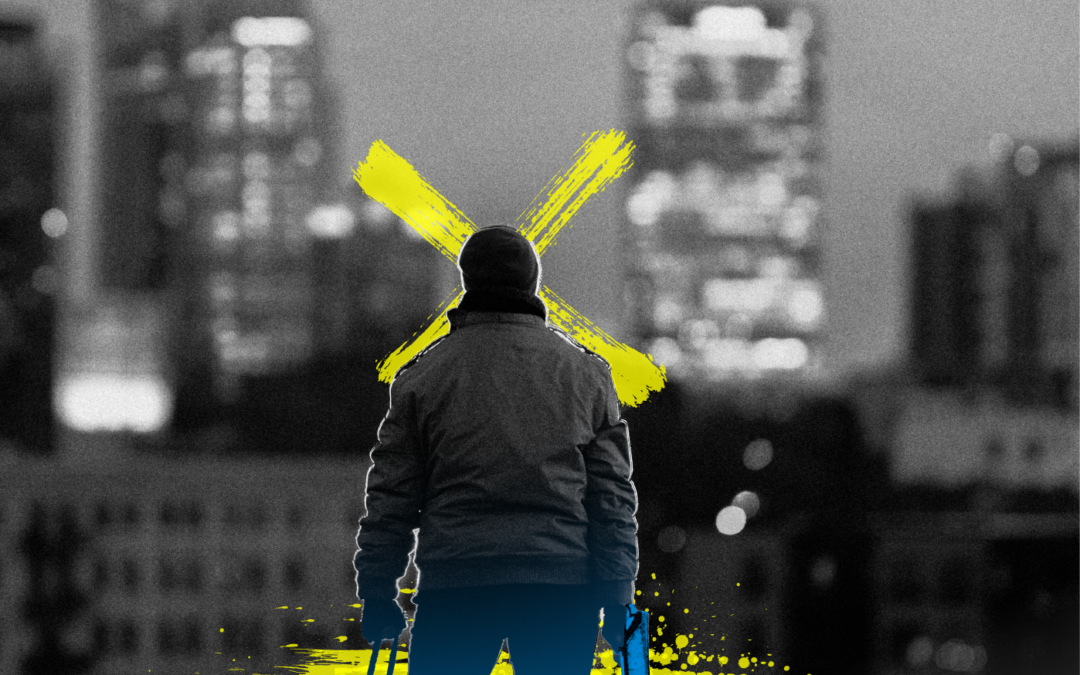 This spring, we got to enjoy not one but two first-of-their-kind narrative Onewheel movies: “Pushback” by Story Is Everything Studio and “The Float Effect” by Cameron Ridge Media. Both Onewheel movies celebrate the sport’s unique community and lifestyle, but they do so from different angles.

“Pushback” (16 minutes and 54 seconds) is character driven and focuses on the role Onewheel played at a coming-of-age moment in one character’s life. It’s a close-up, slice-of-life story that offers a glimpse into the larger Onewheel community as well as how the sport can change someone’s life. As many of us know well, Onewheel is not a hobby; it’s a lifestyle, and “Pushback” illustrates that in this compact, feel-good story.

Packed with great Onewheel and e-board footage, “The Float Effect” (13 minutes and 16 seconds) follows three real-world riders as they form a lifelong bond around Onewheeling. “The Float Effect” delivers frame after frame of exquisite cinematography while telling a slightly larger story about the community as a whole and about Onewheel’s place in electric boardsport history.

Over the years, the Onewheel community has produced some incredible content, from quick and dirty hype reels to long and dreamy visual ASMR through city streets or trails. And who can forget The Float Life’s “Socially Distant” compilation, stoking the stoke while everyone was stuck inside or riding solo during quarantine? But one genre that’s rarely seen is narrative storytelling.

IOWA got to chat with the creative minds behind these two Onewheel movies. Read on to learn more about the making of “Pushback” and “The Float Effect!”

Cassie (Lacey Tatro) is at a crossroads in her life. Should she continue her education? How can she balance her home life? Broadly, how does one “make it” as a young adult these days? When Cassie’s car breaks down, she finally takes up her friend and co-worker (Matt Liguori) on his offer to ride the Onewheel–finding a new ride to work, and also finding herself along the way. 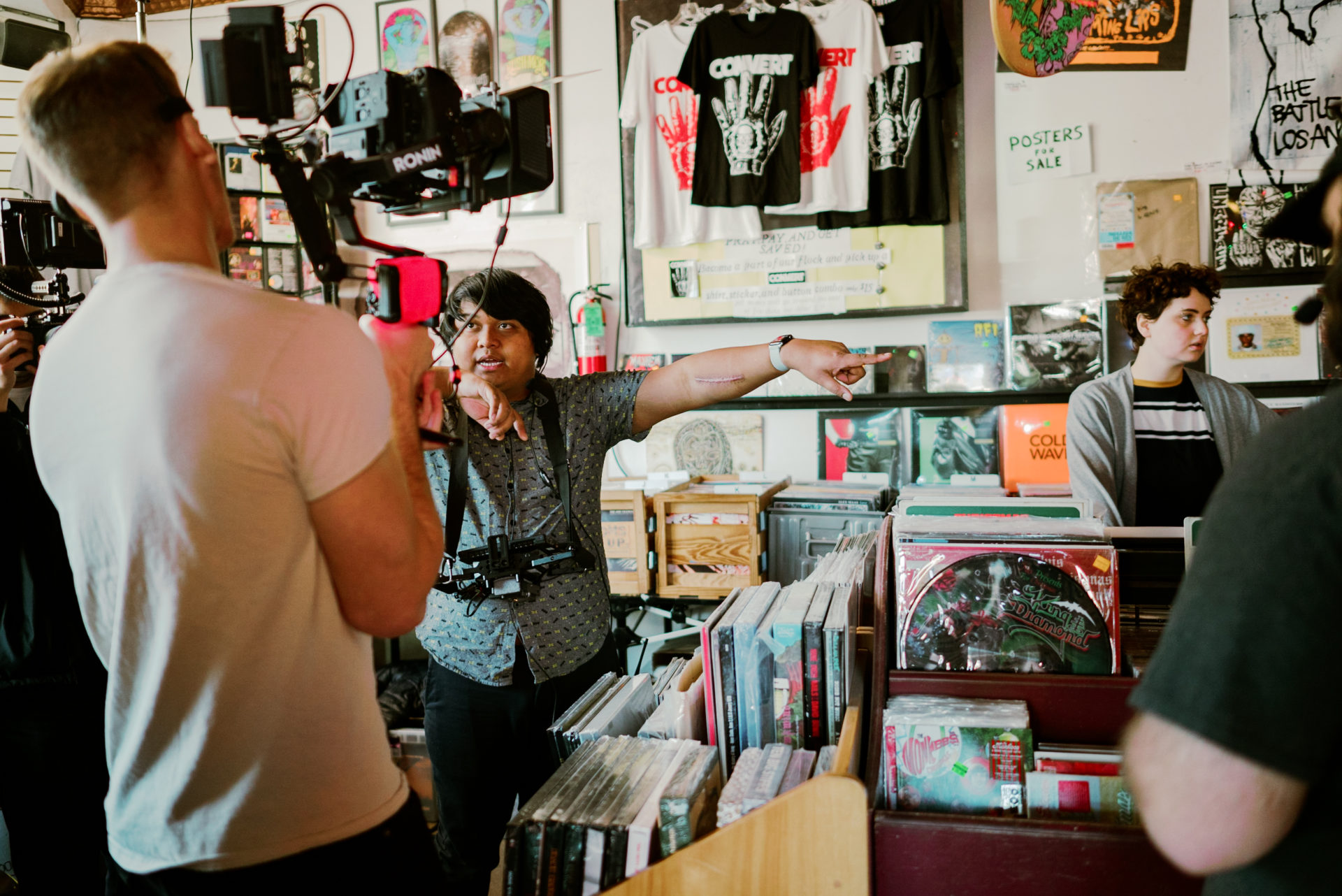 The Making of a Onewheel Movie: Interview with ‘Pushback’ Co-Creator John Carlo Rosillo

Co-director, co-producer- and co-writer John Carlo Rosillo said the idea for this Onewheel movie struck while he and co-creator Zachary Braddy were driving home from Floatlife Fest in September 2021. It had been Braddy’s first Onewheel event, and he’d been inspired by the culture. The rest of the project coalesced naturally out of that energy.

Rosillo and Braddy wrote Cassie’s character specifically for Tatro, who was the newest rider in the group and, like Cassie, found her way to the wheel reluctantly at first.

“Self preservation held me back from even trying it,” recalled Lacey Tatro (Cassie). Add to that the pressure of being a woman surrounded by men, and it can be downright intimidating just getting started, she said. “You feel like you have to be the best at it because, as a female, you represent all females who ride.”

The team felt Tatro would be the best choice to embody the common fears that new riders share such as falling and looking silly. She also had a background in theater that proved valuable not only to her own role, but to everyone else’s. With a BFA in acting and a lifetime of theater productions under her belt, Tatro (who is also billed as an executive producer) quickly became the de facto acting coach for the rest of the cast, none of whom had acted before.

Fortunately, the old acting advice “tell the truth” was easy to follow in this case. When you love something the way Onewheelers love this sport, you almost can’t even call it “acting.” The authenticity in each performance is what makes “Pushback” such a special project for both its creators and its audience.

“Film, for me, is a way to communicate myself,” Rosillo said. With this project, “We all got to say what we really think about riding the Onewheel and what it means for us. That authenticity and accessibility make it a story that can resonate inside and outside the Onewheel community.” 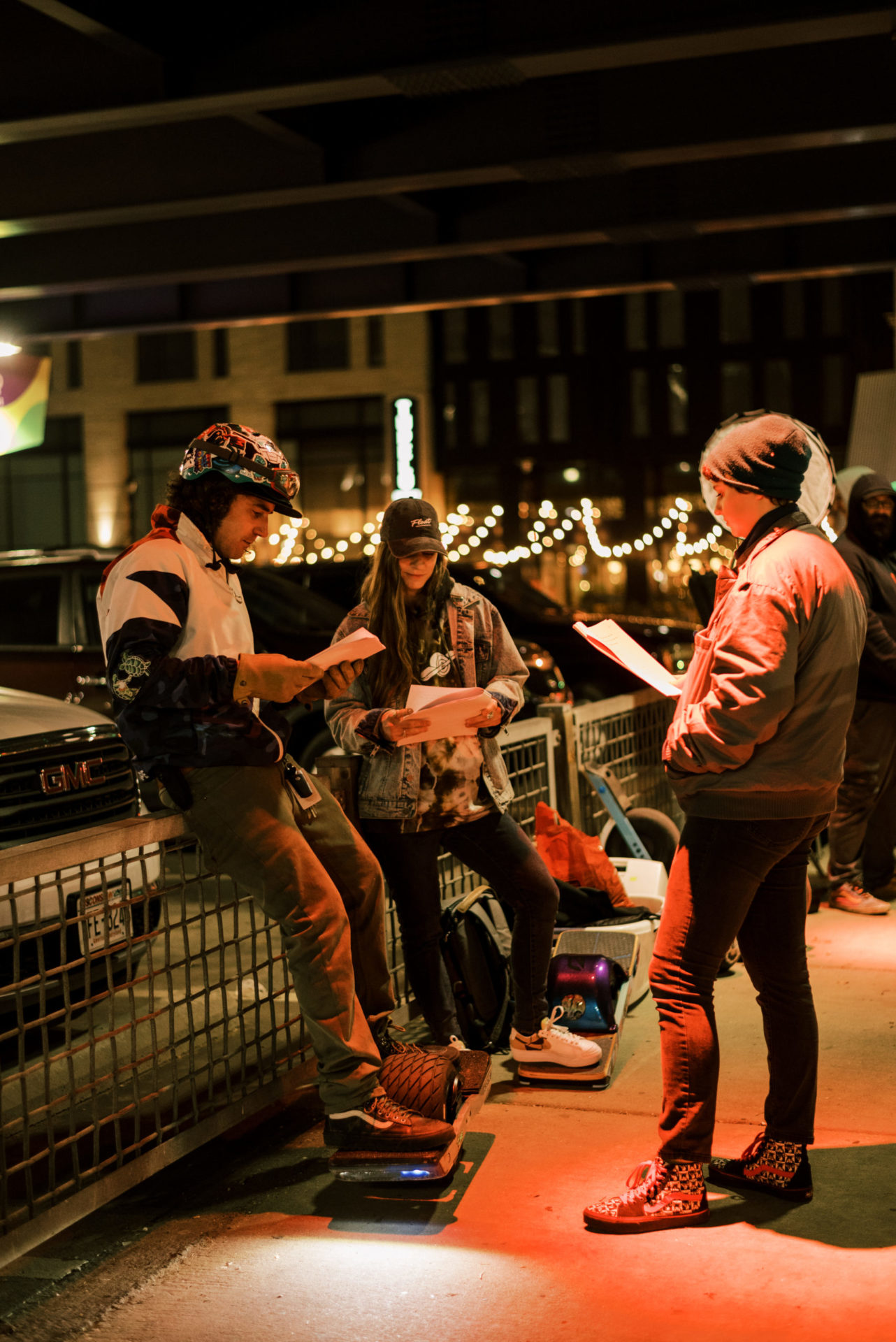 About the Studio: Story Is Everything

You may know Rosillo from his work photographing and filming Onewheel events with the Carve Creative team in 2021. He has since branched out and established his own studio, Story Is Everything, as a home for his film content, Onewheel-related and otherwise. Rosillo explained that the fast turnaround time for event content was just not his style, and he missed the more prolonged editing process from his broadcast and film production days.

“I realized I enjoy working with a bigger team and taking the time to tell a story in the best way,” Rosillo said, “so I decided to go focus on my strengths.”

Subscribe to the Story Is Everything YouTube channel for their forthcoming series “Wheel Stories,” a collection of real stories about real riders, as well as future installments in Cassie’s story, which Rosillo said will dive deeper into what it means to be a female Onewheel rider.

“We included two prominent female riders in this film,” Rosillo said. “I got my friend Genelle [above] involved so we could have better representation. I feel that more women should ride and we hope to do more with that arc to get the conversation going.”

What got you into Onewheeling?

The first time I saw a Onewheel must have been when I was in college about 5 years ago. I saw them on various YouTube channels that I followed and I remember thinking how life-changing it would be to have one. Sure enough, after getting the Onewheel Plus, it would define a part of my life and become my favorite hobby.

How did you come up with the idea for “The Float Effect?”

Sometime in the fall of 2019 I was at a friend’s party at the University of Cincinnati. I’m not much of a partier, so instead I just rode around campus on my Onewheel. This is how I ran into Josh [Haley] and Henry [Dantzer]. They had Boosted boards at the time and without delay, we rode around together the rest of the night.

I mentioned that I am a cinematographer and that I wanted to make some sort of film about e-boarding. They loved this idea and I really just started randomly filming our rides, not knowing what I was exactly trying to make yet. Over time, the project evolved as I re-edited the film again and again until it arrived at what it is now: A story about the Onewheel community and how a toy can turn strangers into family.

How long from start to finish did this film take and any interesting stories along the way?

About two and a half years. There are countless stories I could tell but one that comes to mind is how I broke both my feet throughout filming. On one occasion, a Onewheel fell from a decent height onto my big toe, breaking the bone in half and removing the nail. On another occasion, I rolled my ankle under my board and broke it. Both times, I got back to riding as soon as possible and probably sooner than the doctors recommended.

What camera(s) and lenses did you use?

Tell us about the drone footage.

I actually learned to fly FPV drones (which are different and much more complex than normal consumer drones) specifically for this film. Fairly late in the process I really wanted to have some specific FPV shots in the film but I didn’t know anyone that could fly the drones. So I learned how to fly in a simulator, built a custom drone, and practiced just enough to get the shots I needed.

Learning to fly FPV and do it well was challenging but rewarding, and I’m glad I did because the type of shots you’re able to get with it are breathtaking and take the production value up a great deal. FPY has now become another of my favorite hobbies as well as an amazing filmmaking tool. It has become a major part of my workflow and I intend to use it on as many projects as possible.

Tell us about the editing and your musical choices.

I use the Adobe suite, so I edit in Premiere Pro and do compositing in After Effects. It’s not obvious, but there are plenty of semi-complex visual effects in the film. Several lens flares were 3D tracked in, inappropriate stickers on helmets were digitally changed, shirt and board colors were changed in post to help visual cohesiveness, and red and blue smoke was added digitally to the final shot to give the feeling of a starting line and add visual interest.

Music was a big deal for me when I was editing this. I typically start projects by finding music. I listen to songs and imagine how the film would play out, editing to the music in my head. When I hear the right song, I instantly know it will fit the film and how I would edit around it and it makes me excited to get to work.

What roadblocks did you face?

The biggest roadblock I faced was myself. This was the biggest passion project I’ve ever done and it probably took a few hundred hours of work. Forcing myself to put in the work after a long day of shooting someone else’s music video or commercial was tough. I have clients and other paying projects that demand my attention so working on this personal project in the background was challenging but fulfilling.

How was it filming with your best friends?

Really, they became my best friends throughout the process of filming. It’s fascinating because we have this experience of meeting each other and becoming friends that’s punctuated with a film that we are all proud of and can watch any time to take us right back to those early moments in our friendship.

Can you tell us more about your production company and any upcoming project(s)?

My production company is Cameron Ridge Media and I am a Cinematographer and FPY pilot. I primarily shoot music videos, commercials, and video marketing. There’s always something new and exciting happening. I have some music videos coming up that I’m pretty excited for. I’m trying to do more FPV any way I can. I’d like to make that a large part of what I offer.

Lastly, any advice for Onewheeling filmmakers?

Onewheeling and filming at the same time is hard and takes practice! Just keep making the best content you can for this community. It helps get new people into it and helps keep the stoke alive for those who are already a part of it.

If you haven’t watched these Onewheel movies yet, it’s time to pop some corn and boot up the big screen. Be sure to pump up those speakers to receive the full recommended dose of stoke. Also, make sure your board is charging while you watch, because you will want to ride after the credits roll!