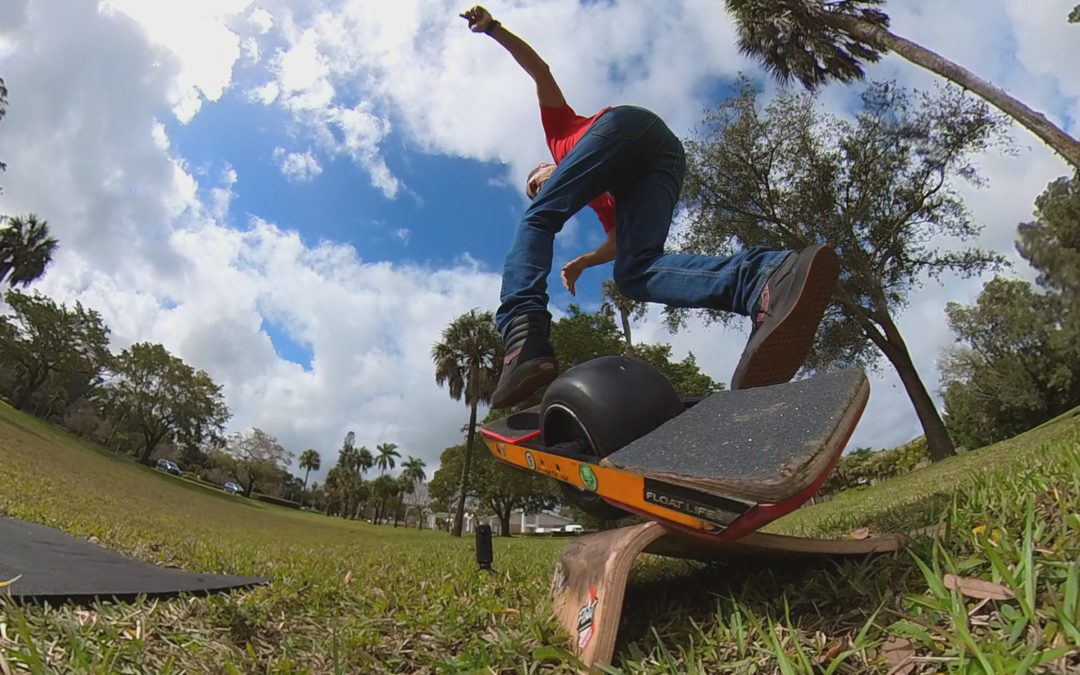 Introducing the Richflip: A 360 Kick Flip for Onewheels

We’ve all heard someone shout, “Do a kickflip!” as we rolled past on our onewheel. Well, Chris Richardson can actually do one. And an ollie—a real ollie, not just a bonk, though he doesn’t recommend it. Since the very first days of onewheel, Richardson has been breaking down the mechanics of known tricks as well as laying down his own never-been-done (NBD) moves.

In 2019 he invented the Darkslide, a curb slide where the rider flips the onewheel over and slides with the sensor side down. Now he’s done it again with the Richflip, an insane variation on the skateboarding tre flip, also referred to as a 360 kickflip.

In the Richflip, the onewheel completes 2 rotations midair. The first rotation brings the tail around 360 degrees clockwise. The second brings the toeside over the heelside 180 degrees before weirdly switching direction and returning the board to its original orientation.

We talked to Richardson about the inspiration and process behind the invention of the Richflip, including a brief primer on the physics that cause this bizarre rotational reversal.

The invention of the Richflip has been a years-long process. The idea struck while Richardson was working on a different trick and noticed the board kept almost flipping over.

“I still have a kid’s mind,” Richardson said. “That makes everything just a little bit more whimsical. Sometimes something happens by accident and I get really curious about whether I can do it intentionally.”

“I set my challenges big,” Richardson admitted. “There’s plenty of tricks that I’ve tried over the years that I never did get. But sometimes I’ll find one and I really do think it’s possible and I go through phases where I try to figure it out.”

Possible, however, didn’t mean “easy.” Richardson drew marks on his tire and analyzed slow motion footage of his progress, or lack thereof. He bruised his shins, bought soccer guards, and tried again. He sprained his ankle, rested for a week, and tried again. It took hundreds of tries over the years, and sometimes Richardson had to walk away for weeks or months at a time—but he always came back. 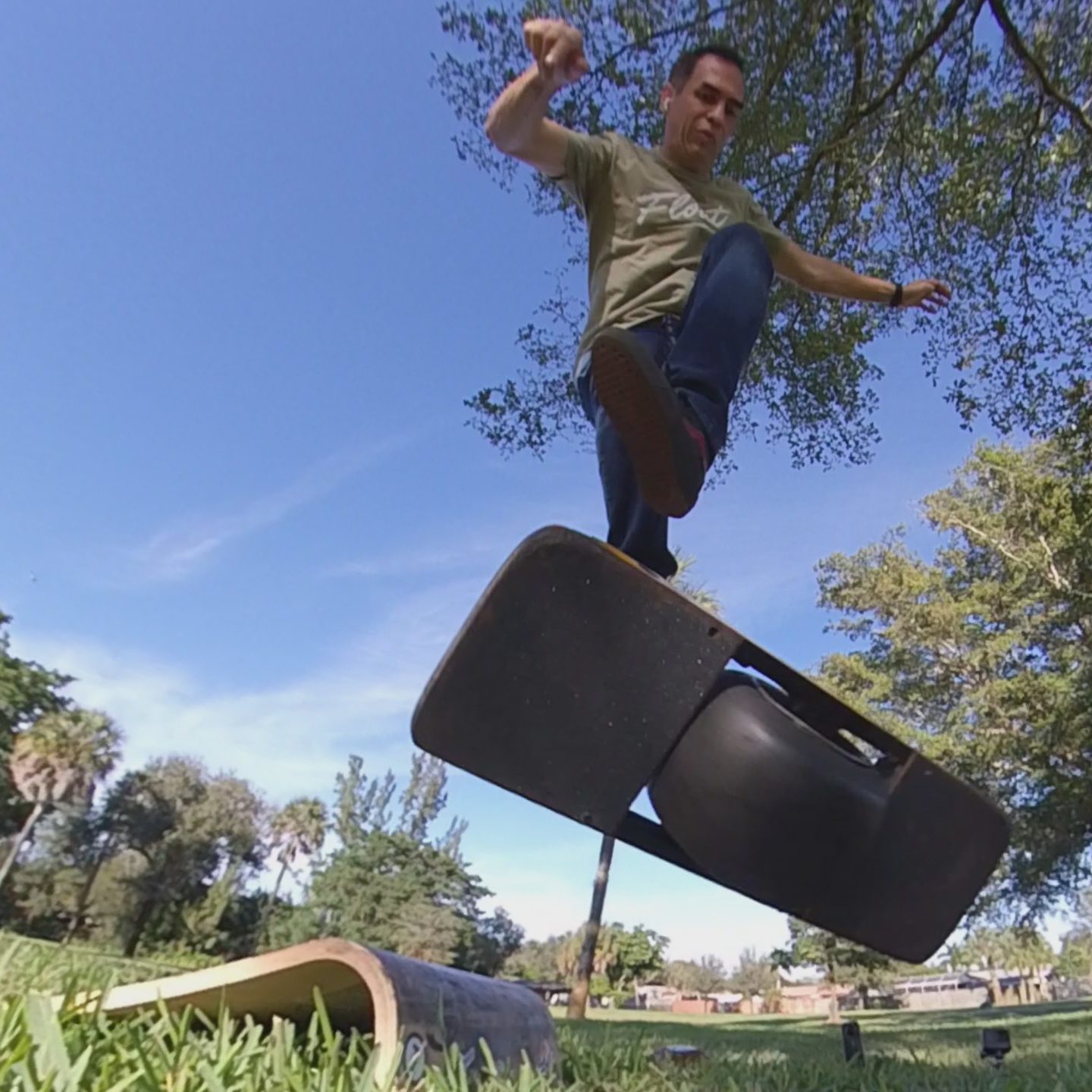 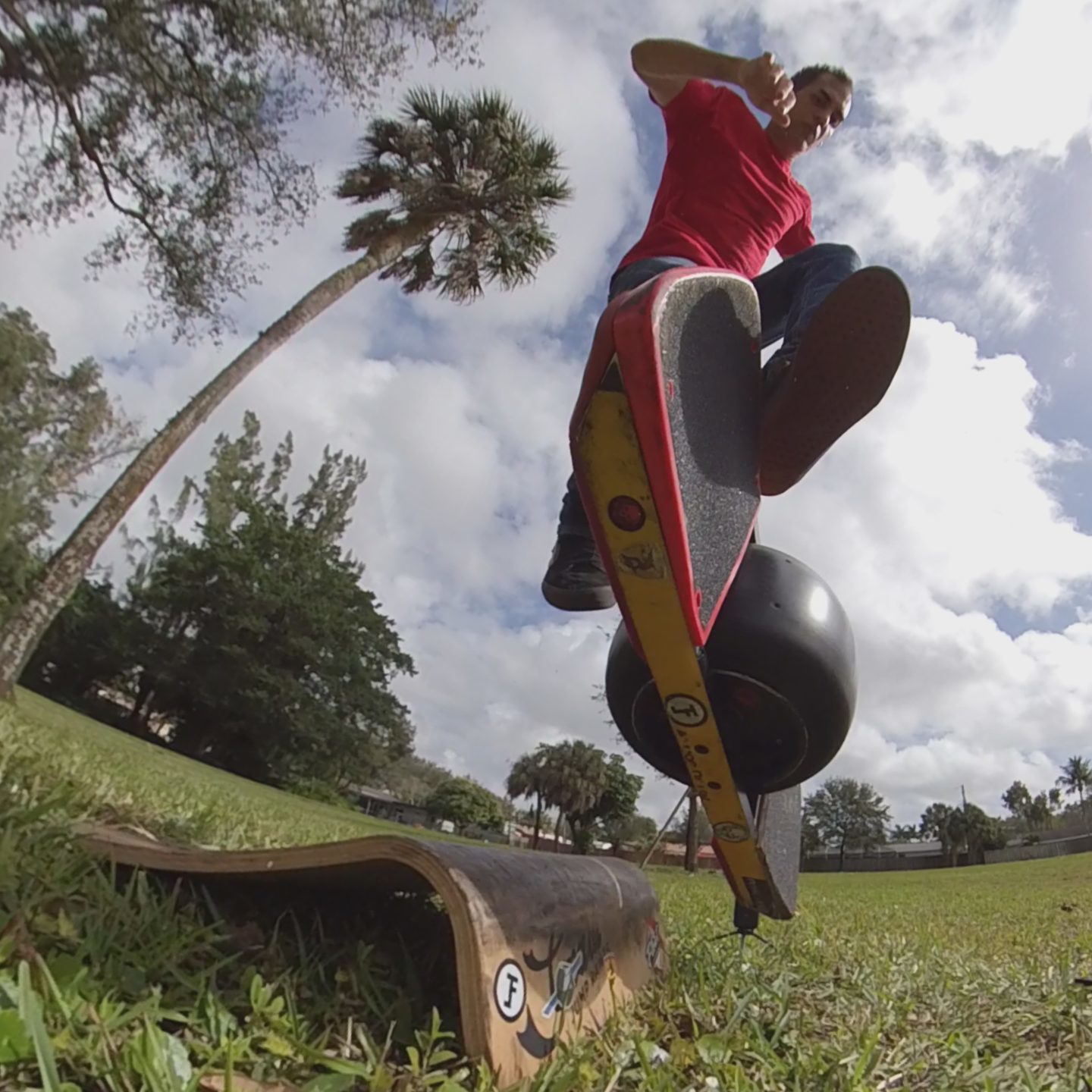 Richardson studied topics like neurolinguistic programming (NLP), hypnosis, and how to rewire the brain—in other words, learning how to learn—for the past 15 years. He provides coaching services based on these principles, and applies them in his own life when learning onewheel or skateboarding tricks. He believes that unlocking the mental side of riding can open up a whole new world of possibilities—and based on his track record of onewheel NBDs, we’re gonna say he’s probably right.

Several months ago, Richardson had an “aha” moment where he came close enough to landing the trick to see what the board was really doing—and it was totally counterintuitive.

After that, he started dedicating himself in earnest. He drilled the trick daily, took videos, analyzed footage and took notes. Every small aspect had to be honed and committed to muscle memory: Foot positioning, timing, how much pressure to apply and at what angle. Every day he got a little bit closer to landing on his feet, engaging the sensor, and rolling away from the first-ever onewheel tre flip.

HOW IT WORKS: THE TENNIS RACKET THEOREM

There are some crazy physics behind the Richflip. The Dzhanibekov Effect, or Tennis Racket Theorem, describes the strange instabilities of certain spinning objects. It essentially boils down to how asymmetrical mass affects the centripetal and centrifugal forces of rotating objects.

This is most easily demonstrated by flipping a tennis racket head-over-handle. The racket completes a second half-rotation midair, so that the face of the racket that started out on top will now be facing down.

The Dzhanibekov Effect comes into play in skateboarding with the Monster Flip, a nearly impossible trick in which the skater wraps one foot around the board’s tail to prevent it from making the natural secondary rotation that physics demands. Believe it or not, someone did a whole scientific paper about this. Read it here if you like math.

If you watch the Richflip frame by frame, you’ll see the same effect in action, bringing the toeside rail over and back while the tail completes its rotation. 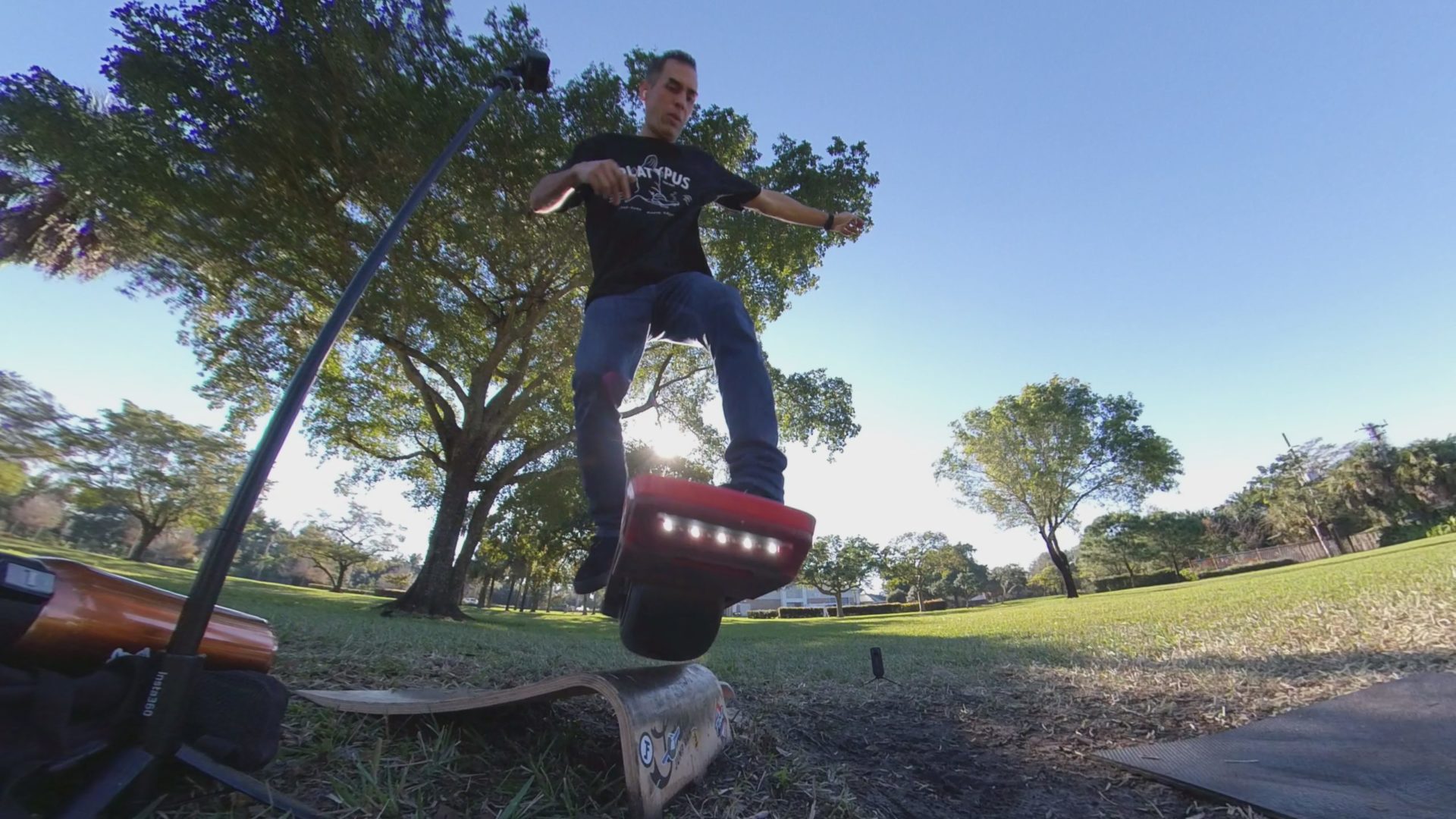 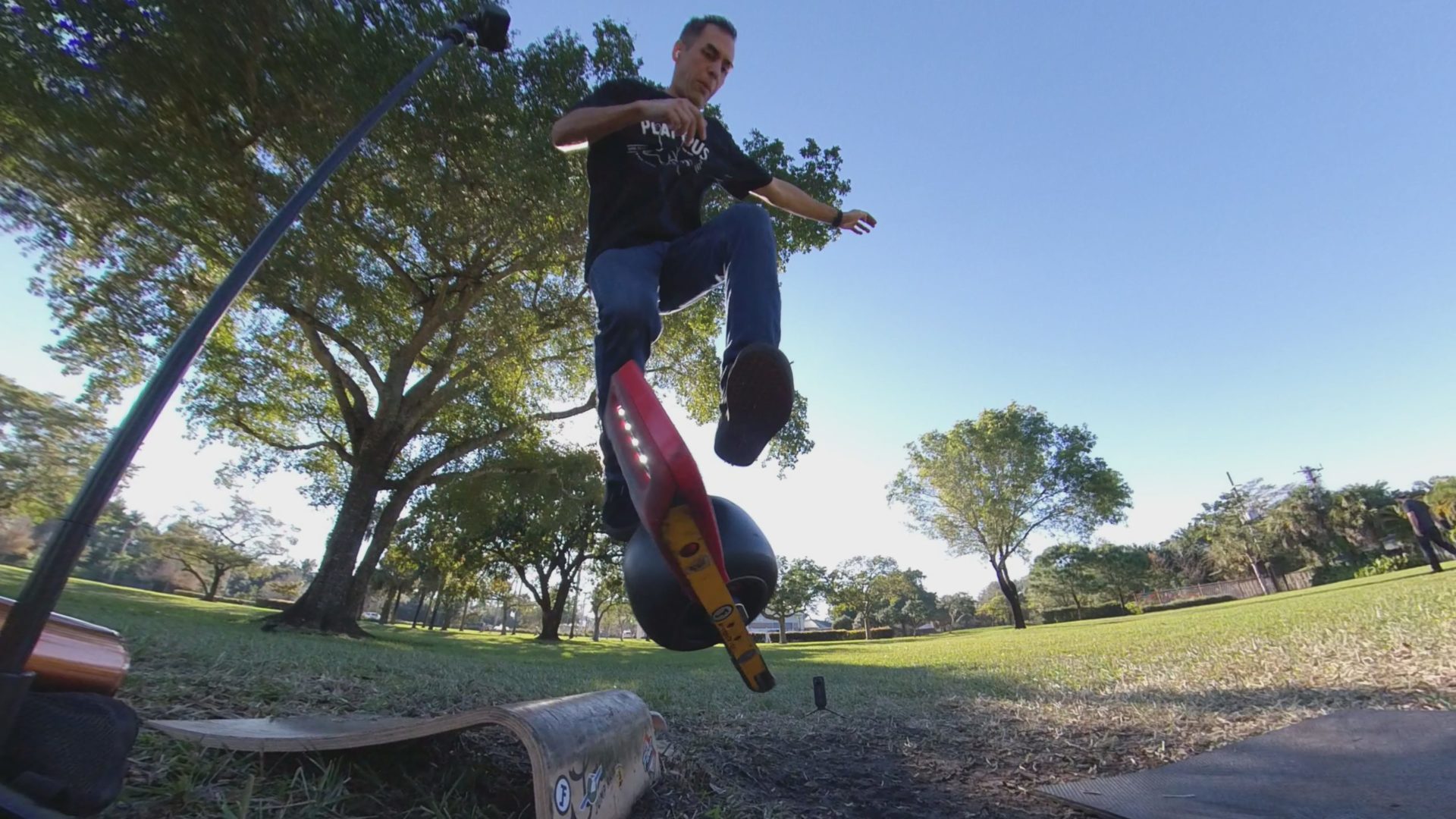 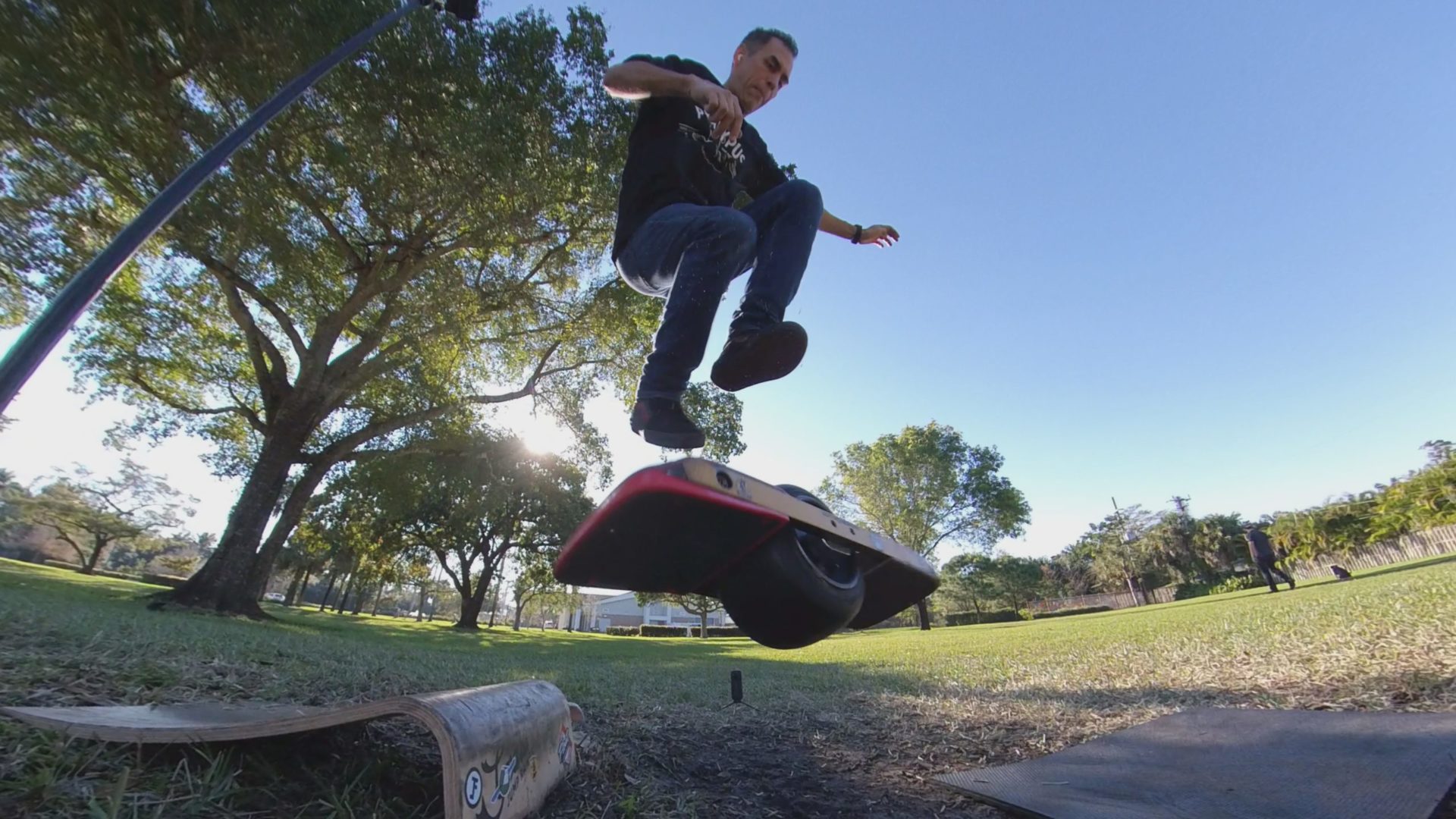 So You Want to Do a Richflip

Cool trick, bro—how’d you do it? For those who’d like to attempt the Richflip, Richardson offers these pointers:

Finally, and perhaps most importantly, don’t neglect the mental aspect! Reach out to Richardson on YouTube or Instagram at the handle @onewheeel (with 3 “e”s) to inquire about his coaching services.

Chris wanted to give a few shout-outs to the people and sponsors who helped make the Richflip possible. Matt Hoover was an immense help in creating custom tuned Land Surf Platysense front sensors which completely changed the game and opened up new possibilities, Cory Boehne from Armor Dilloz helped with tuning and analysis, and The Float Life Growler kit and accessories gave it just the right feel.

You can find Chris on: